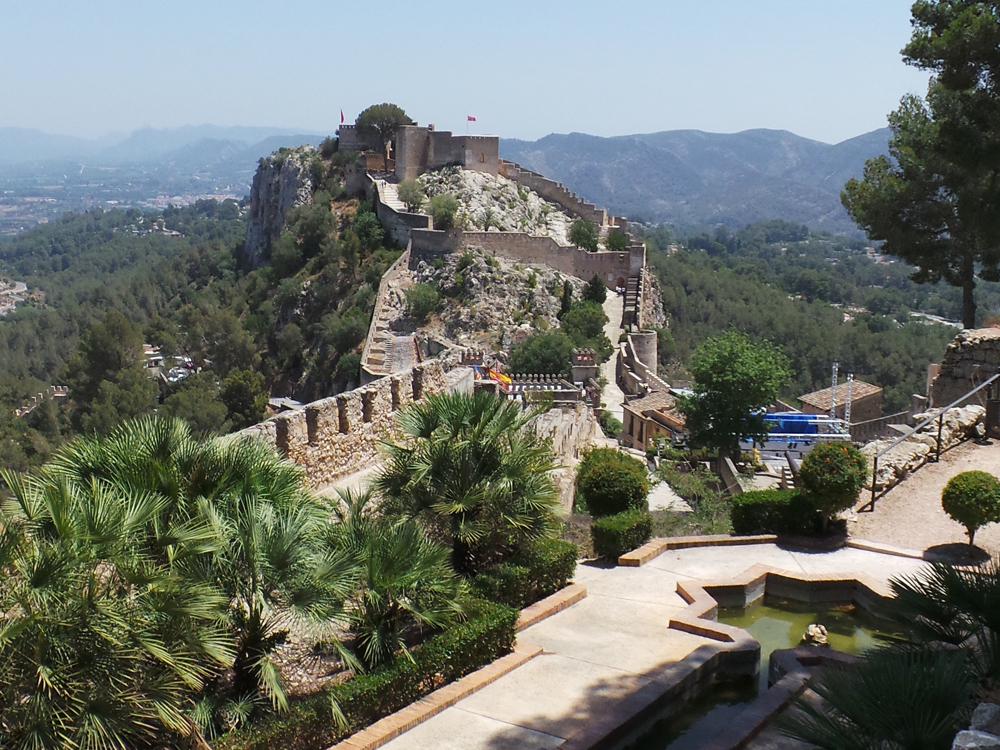 Are you dreaming of owning a home in Valencia and being the king or queen of your very own castle here? Dreams can come true, just take a look at our website and see for yourself! But how would it feel to be king or queen for a day in the biggest historical castle in Valencia?

The castle of Xàtiva or the Castell de Xàtiva is the jewel in the crown of the Valencian town of Xàtiva, a city steeped in culture and tradition. The castle is simply beautiful with the stunning views that soar above the town and across to the valley of Bixquert. The town itself is known as ‘the town of a thousand fountains’. This maybe somewhat exaggerated but Xàtiva‘s rich historical past is everywhere to be seen, from its beautiful churches to the small rustic courtyards and yes, of course its fountains.

With such a majestic location at the top of the hill it is no surprise that the Castell de Xàtiva is still standing today, although its location is no coincidence. It was purposely built to control the Roman’s ancient road known as the ‘Via Augusta’. The 1,500 km road stretched from Rome across to the Pyranees and along the Mediterranean coastline down to Murcia. Today you will find the A-7 motorway and the N-340 in its place, so the next time you hear the saying that ‘all roads lead to Rome’ you may wish to agree because in a way it’s true.

As you begin the tour of the castle it’s essential to have a large bottle of water and some appropriate footwear as there are parts that are slightly uneven. Be prepared to step back in time and imagine what life could have been like living in the castle.

La Porta Ferrissa (the iron gate) is the main entrance to the castle. It is located approximately in the same place as the original, despite the reforms in the middle part of last century. La Porta Ferrissa preceded another gate, La Porta Forana, (the foreign gate) which was blown up by the French army in its retreat after the War of Independence in 1813.

Once you have entered the castle, you climb up the short slope and walk into a medieval courtyard where the castle is split into two parts. On the left hand side you have Castell Minor from the Iberian settlement. On the right you have Major Castell from the Islamic occupancy mixed with several medieval Christian buildings. Major Castell is the largest and best preserved part of the castle. Despite its Iberian Roman roots, most of the walls and towers are Islamic or Gothic in origin due to the Moroccon dynasties who also occupied the castle.

We shall start with the oldest part first or the Castell Minor. Once you have climbed up to the left hand side, you are rewarded with the best panoramic views to the east and accross the town of Xàtiva and the valley of Bixquert.

On the top of Castell Minor, on a prominent rock stands the tower of queen Imilce. Over the years the tower has been re-built and a neo-gothic balcony which stands in its place today offers the best views overlooking the other part of the castle, Castell Major.

Quite a few years later in the summer of 1244, after a very long battle, King James I of Aragon finally captured Xátiva castle. The ‘Treaty of Jativa’ meant that he could not claim the castle straight away as it stated that the Moors could have a further two years to surrender before finally handing the castle over to the Christian monarchy.

Major Castell stands tall, with a very high imposing west facing wall perched on the crest of the Sierra de Vernissa, to the right of the square which is know as the Plaza de Armas (barrack square). After the Christian conquest of King James I, the castle became the main strength of defense on the road between Castile and the new founded Kingdom of Valencia.

Throughout Major Castell there are spaces and rooms that allow you to imagine how everyday life in the fortress would have been. From the watch towers, water storage for the guards and of course the chapel of Santa Maria.

The darker areas of the King James’ I rule were the dungeons. The fort was also used as a prison of the state and his most illustrious prisoners would have been kept here. The most renowned prisoner was Jaume d’Urgell, who unsuccessfully rebelled after being rejected as a candidate for the Crown of Aragon in the Commitment of Caspe in 1412. Legend has it that after spending so much time in this dark and gloomy cell, he died as he left his cell and entered into the daylight due to his blindness. His remains lay in the Queen Mary Chapel that was built in the fifteenth century and was restored only a few years ago. It is a small and delicate building with stone walls, a tribute to the castle’s most famous prisoner.

Such beautiful historical tales from a castle who has seen many a conflict in its time. If only walls could talk, I’m sure they would have a lot of secrets to tell us! To imagine that the original castle had 30 towers, 12 reservoirs, 2 chapels and a large watch tower. The devestating earthquake of 1748 destroyed much of the castle, but it still has parts that are highly impressive to a see and the views alone make it well worth a visit.