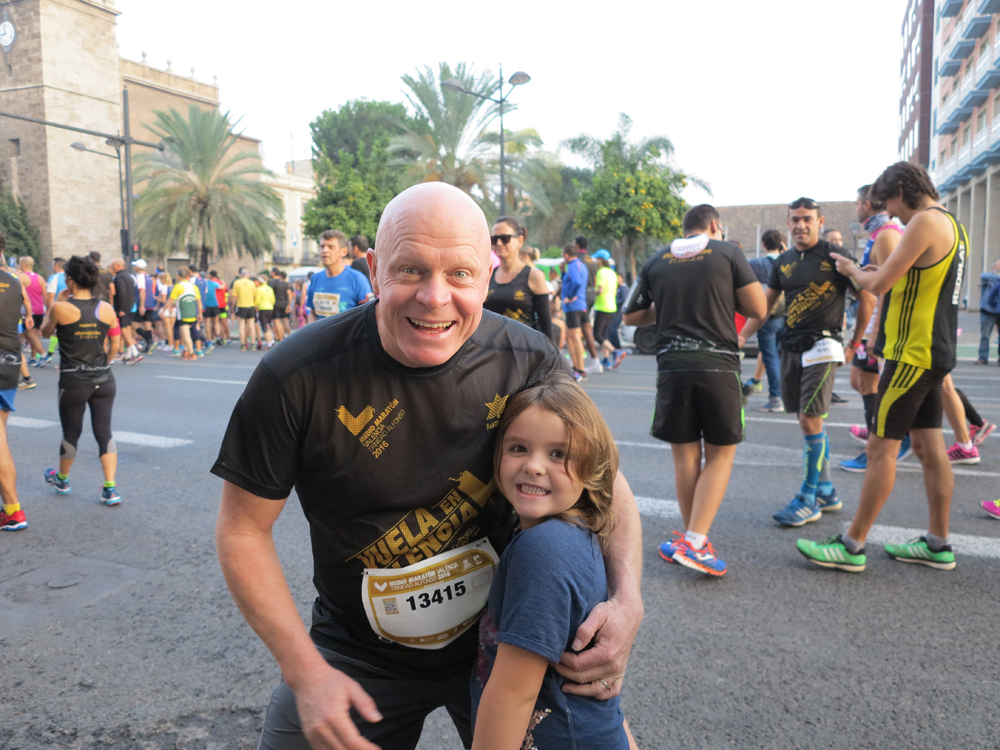 Valencia is known as the city of running and on Sunday 23rd October 2016 Simon (the owner of Azahar Properties) ran the half marathon in Valencia. After a slightly chilly start, the weather for the runners was perfect if not a little too hot as it had already warmed up quite early on. The blue skies, sparkling water and super yachts in the Marina were the perfect backdrop for the half marathon. The numbers were in force yet again, with 13,500 runners from all over the world participating in this spectacular event.

The finishing line was decorated in gold to commemorate the IAAF Road Race Gold Label, (International Association of Athletics Federations). Valencia is actually the first city in Spain to receive this award so the organisers chose a new route to make this race even more attractive and faster for all participants involved. The official race t-shirt was given away to every participant, printed in black and gold and super lightweight to enable each of the runners to ‘fly’ through the city.

The crowds religiously gathered to line the streets in mark of their support to the people who were brave enough to run and this year was no different. Police presence was high with helicopters flying over head to check that everything was under control. The race was a true milestone for the city of Valencia. The atmosphere was emotionally charged as always especially after the the race the sense of achievement for each person is overwhelming and extremely emotional. Simon said:

‘The atmosphere is just brilliant and the crowd gives you so much support. The other runners help you as well by spurring you on…it’s an amazing experience!’

This years winner was Kibet Stephen Kosgei with the official time of 0:59:27, which shows the commitment and dedication of the professional runners who achieve these incredible times. However, crossing that golden finishing line was special for everyone and every runner gets awarded a medal at the end, which they clearly deserve along with a super cold Radler’s beer would you believe. I’m sure drinking beer after a half marathon would only happen in Spain! These races are highly organised with each runner marked with his/her own bib number and chip. The results are published a few hours after the race and each runner is lucky or unlucky enough to either receive a text message with their results or they can view them on line at the official website.

Every year, the Trinidad Alfonso Valencia Half Marathon chooses a good cause to raise money for. This year it was the Alzheimer Family Association of Valencia (AFAV). Their mission is to help the families who are affected by degenerative mental illnesses like Alzheimers.