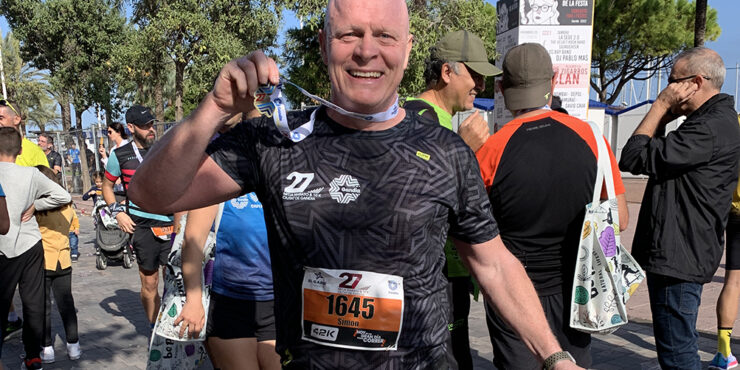 Gandia’s half marathon was held on Sunday 13th November this year, which is an important event with runners in and around the Valencian community. The weather conditions were perfect, the sun was out, the sky was blue, the temperature even reached a high of 22 degrees, which is a pretty good for the middle of November! Although the music was deafening as the 2,500 runners started their race at 9.30am.

The flat route meant that the average speed for the race was fast, especially the leaders who came in at just over the hour which is impressive to say the least.

The support of the huge crowd lining the historic streets of Gandia city and all along the beautiful beach front was electric. The residents of Gandia made the half marathon circuit a joy to run and there was an amazing atmosphere throughout the entire 21 km of the circuit.

Simon says it is certainly one of his favourites and with the advantage of a new course this year that started and ended at the marina of Gandia. The beach was the perfect backdrop with the energy of the sea and the palm tree lined beach of the playa, justifiably regarded as one of the best beaches of the Valencia coastline.

The Gandia half marathon is an annual event held and it is easy to apply for online. With some training it is well worth considering taking part in as it is such an amazing event. Then the icing on the cake is that for every runner that finishes the race they are given a goody bag and a much needed cold beer for tired runners. The medals were handed out to the first three places in both of the men’s and women’s categories, as well as medals for every runner who completed the half marathon.