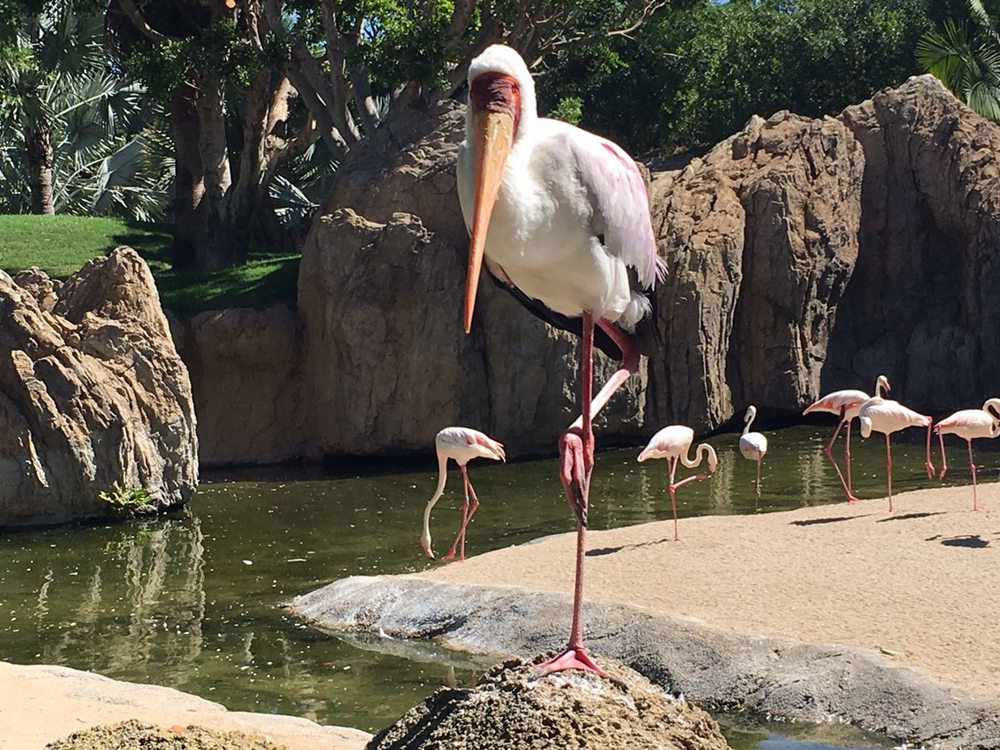 The design of the park is its key feature, playing on what the Spanish call, ‘zooimersion’. The concept is simple: the visitors are immersed into the animals’ habitat and not the other way round. It is also good to know that many of the animals were moved or literally ‘saved’ from the old Valencia zoo when the Bioparc first opened it’s doors in 2008.

The park has been beautifully created with walkways snaking through the exotic grounds, dotted with viewing areas from where you can stop and admire the animals. Whilst walking around you don’t even notice the natural barriers in the form of a pond or rock formation, ensuring the safety of the animals at all times (ok and the visitors). The café even has a covered outside dining area from where you can look across and out towards the African Savannah, now you can’t get a much better view than that with your lunch!

The Bioparc have replicated huge rocks, boulders and the giant baobab trees, for the mightily impressive African Savannah scenery. It’s a dramatic sight to see the elephants against such a majestic backdrop, you would never believe that the city of Valencia is a stones throw away, quite literally.

When you enter you will be amazed by how 10 hectares (25 acres) on the outskirts of the city transforms you into another world. You can advance through the forests of Madagascar without even getting your feet wet, it’s a truley unique experience.

Speaking of Madagascar, it’s great to see the more social animals like the lemurs living together in groups, you could even pull their tails they are so close. Another great example of the park’s unique design is that it allows various species co-existing in the same habitats as they would in the wild. Take for example the animals from the plains of Africa like the zebras, giraffes and the elephants.

If you would like to visit, from 1st – 15th October 2017, the Bioparc are offering BIOdías, a cheaper entrance ticket to promote their commitment involving endangered species. Every visitor contributes 1 Euro which is allocated towards one of three conservation projects in Africa close to their hearts. Some of these endangered species actually live in the Bioparc: the mountain bongo and the rhino are amongst them.

The park are celebrating their newest addition this month, with the birth of a baby zebra in September, living proof that the animals are happy and thriving. The Bioparc’s ultimate goal is conservation, so by visiting the park and seeing the animals, you are in turn supporting them. To be able to get so close and marvel at the wonders of nature is a fantastic and a truly unforgettable experience no matter what your age.